Excerpt from a homage by Dr. Hanne Weskott 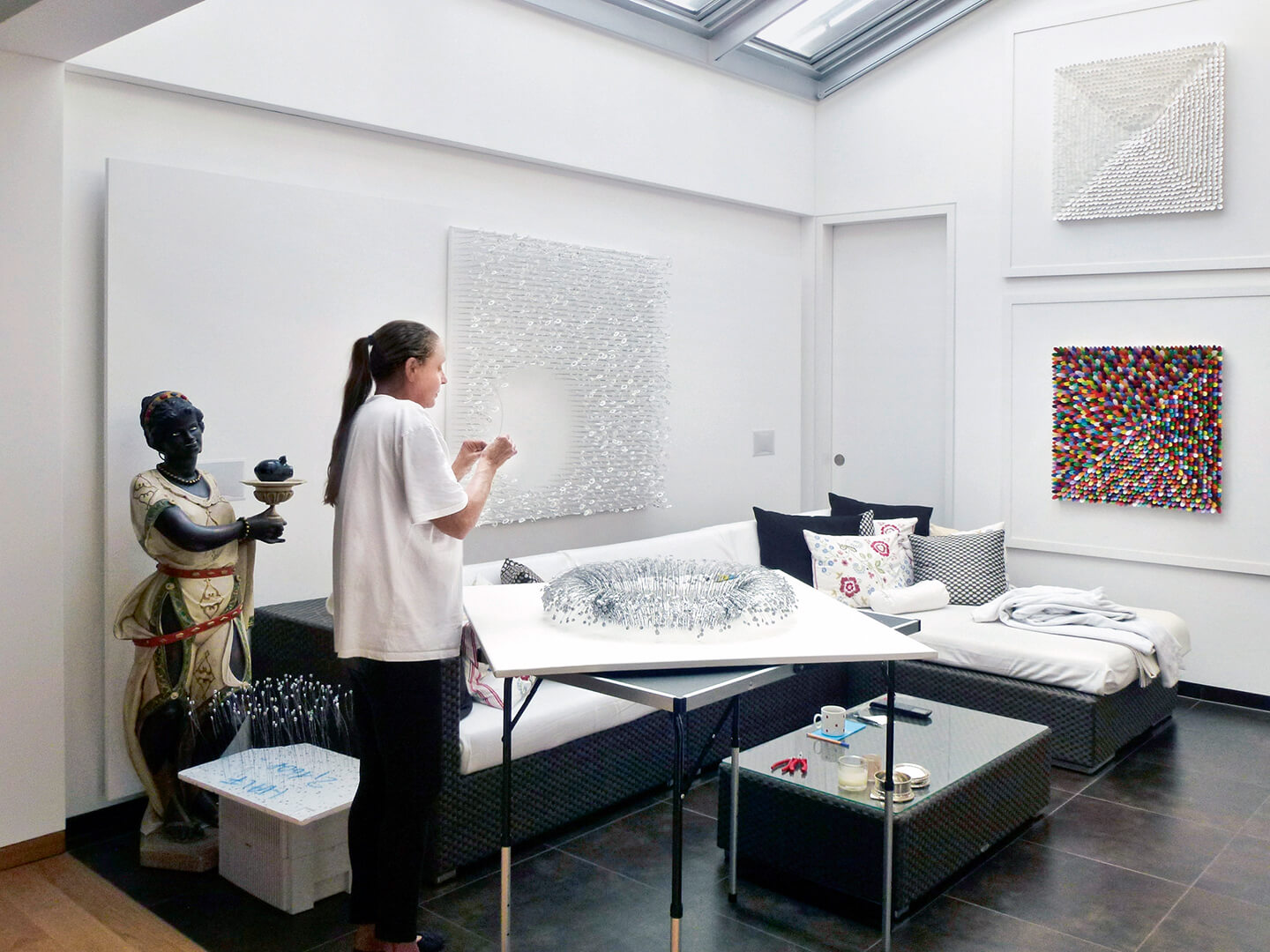 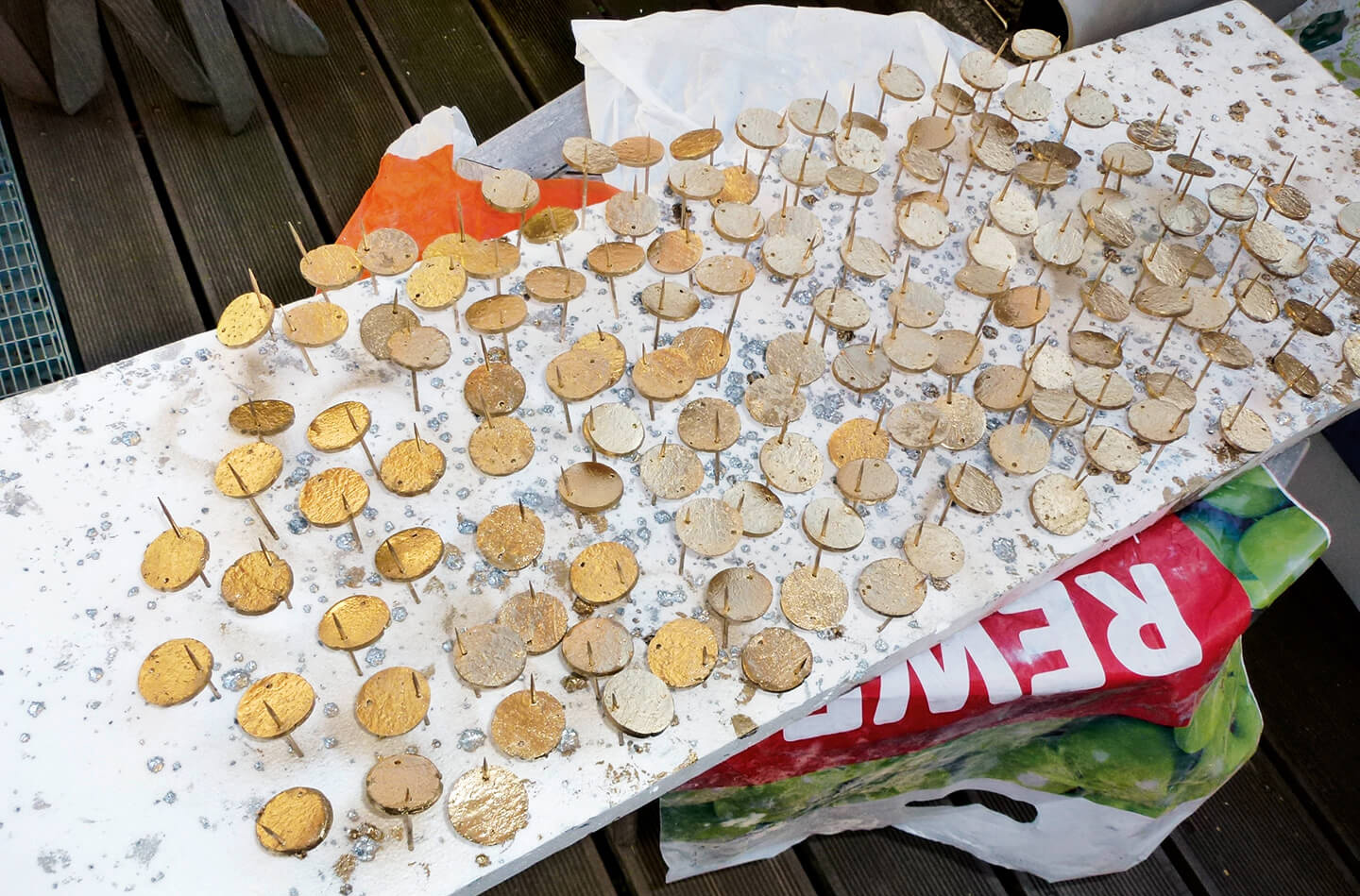 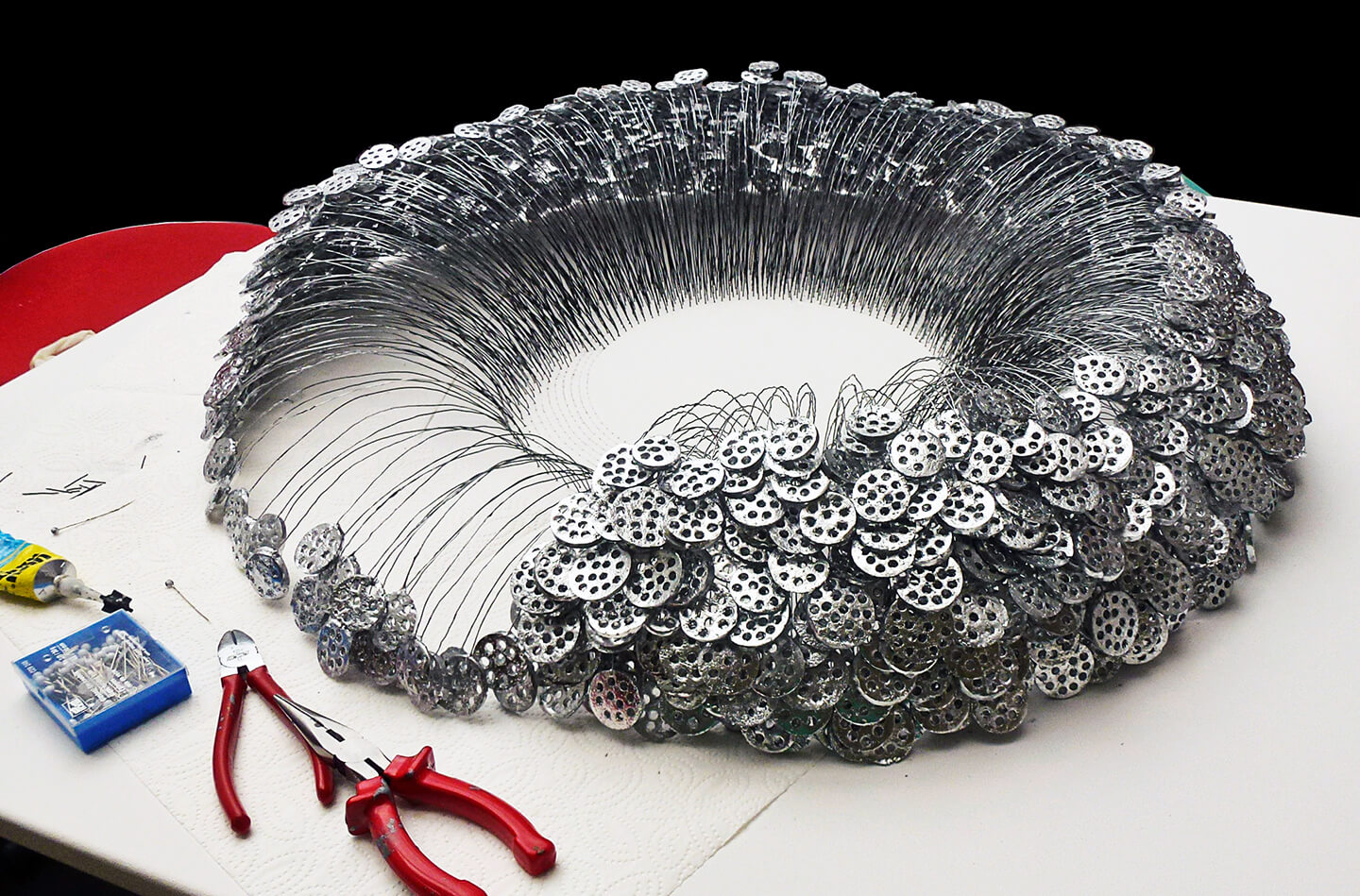 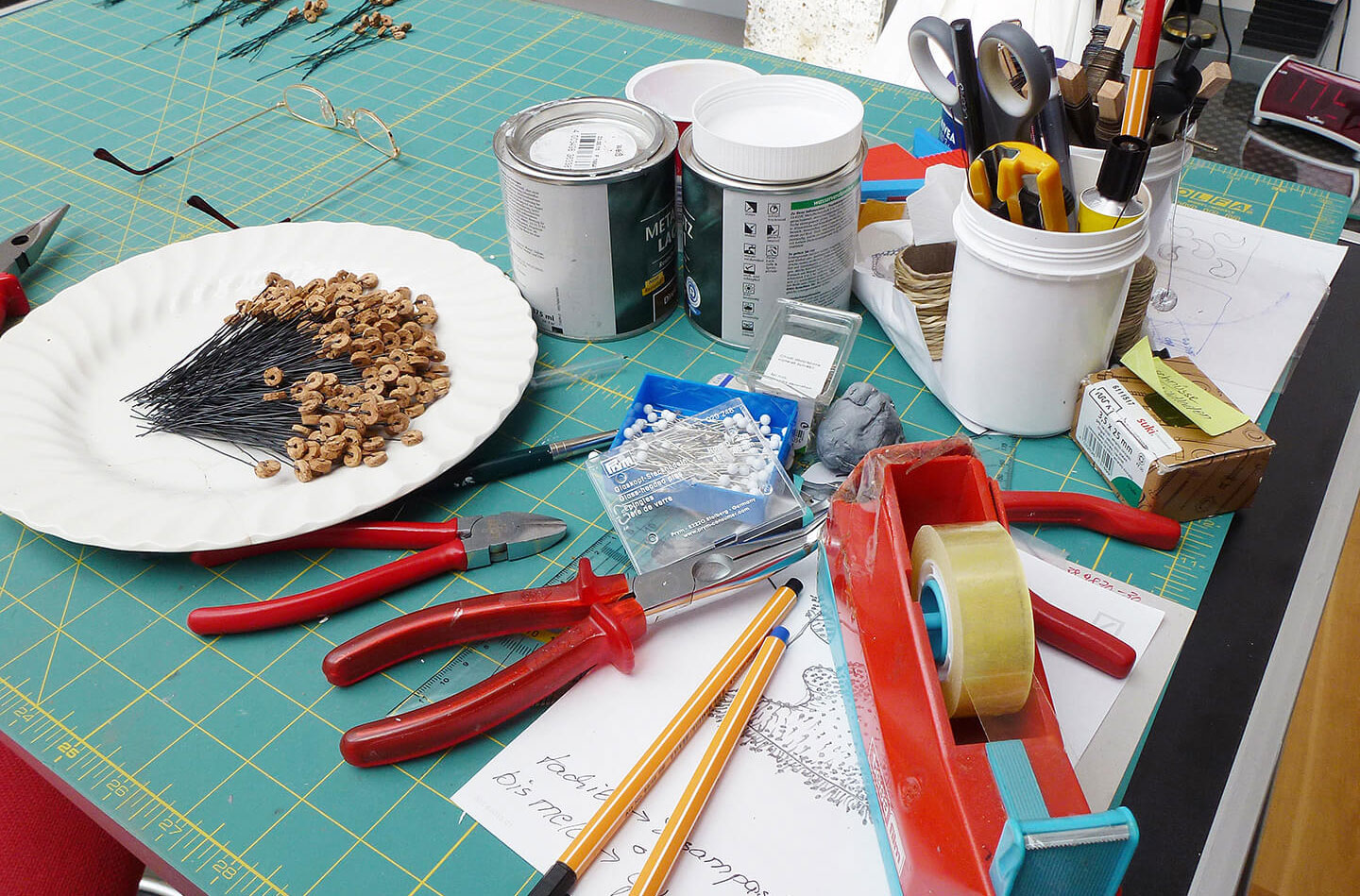 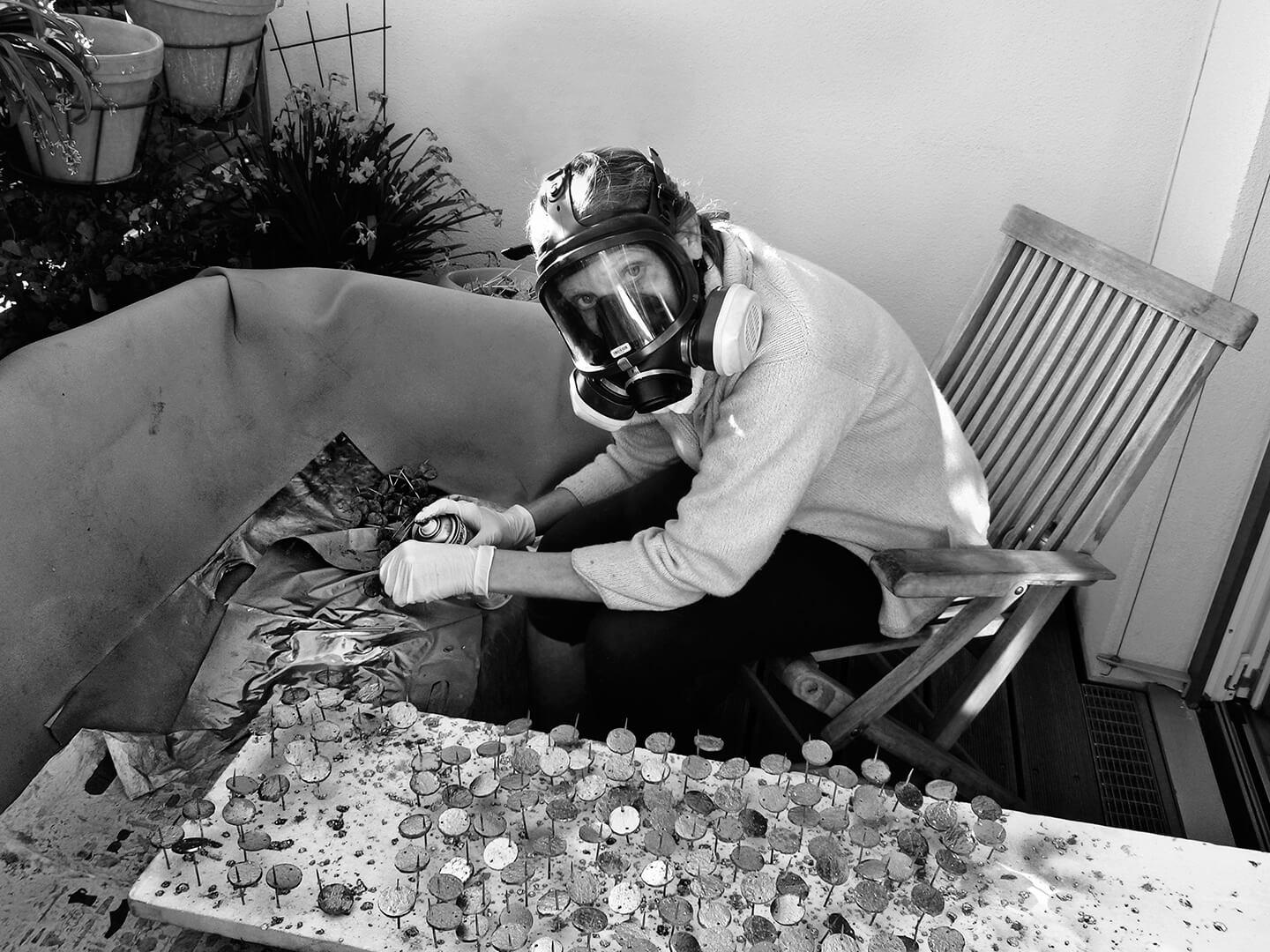 In her childhood Renate Fabricius learned not to discard things carelessly. And consequently her creativity was stimulated very early. She learned to see more in things than just their intended use, and so she made her first relief as a teenager. Later she started painting, but then she had the idea of making an artwork using corks that had been cut diagonally and then painted. This was originally intended for a gift. She primed a canvas with white paint, divided it into four triangular areas, systematically arranged the colourful corks so that they spread out in all four cardinal directions of the compass starting from the centre and attached them onto the canvas with structure paste. Voilà, the first artwork using her new technique was finished: “Quadrat Bunt” (“Square Colorful”). That was in 1998. Yet, since her love of the achromatic colour white is much greater than that for all other colours, she continued this approach. And this time the result was “Quadrat Weiss” (“Square White”).

The objects collected for Renate Fabricius’s works are inherently worthless. They were not collected for their own sake but only to be used as working material and, hence, they serve the same purpose as brushes and paints do for painting. The fact that Renate Fabricius frequently uses wine corks for her reliefs is not significant for the messages her work wants to convey; rather it is a curiosity that intrigues the viewer. If you were to look for a reference in art history, you would most likely find one in Zero, an art movement of the 1950s, which focused on the colour white. In this respect, we should look at the work of Enrico Castellani, an Italian painter closely associated with Zero. He modulated his monochromatic, often purely white, pieces with surface configurations to give rhythm to the reflection of light.

Renate Fabricius also wants to catch the light in her pictorial reliefs, structure it rhythmically or make it vibrate as in “Tatzelwurm”. And, moreover, she makes no secret of the fact that they are used objects: for example, you can frequently see the hole left by a corkscrew in the corks used in her work. This is not negligence. Indeed, a perfectionist like Renate Fabricius would never permit herself such an indulgence. The object, as worthless as it may be, is not supposed to disappear by being used as a pictorial instrument. At the same time, however, it is not supposed to move into the foreground excessively either. The corks are cut in different variations, painted, holes are punched into them and then they are attached to the canvas or speared onto florist wire. The perfume bottles, glass balls, sealing rings or safety pins also are only the means to an end; in other words, although they may be the formal reason for the arrangement, they have no direct relationship to the message of the work, even if the work is succinctly called “Safety Pins”.

Not all titles are so matter-of-fact, because Renate Fabricius – contrary to the dogmatic followers of Concrete Art – is open to interpretation. Thus, the pictorial relief, in which glass stoppers from perfume bottles, with small figures inside, are connected by wire running criss-cross over the canvas is called “NSA, CIA, BND”; and one of the panels with interlooping wire connections between sealing rings is called “Die Gedanken sind frei” (“Thoughts are Free”). There is also a “Modern Icon”: small gold-plated pieces of cork that freely exhibit signs of wear are attached to a brownish canvas. They do not completely cover the background, thereby breaking with the system of a strictly ordered arrangement. With these omissions, Renate Fabricius refers to life, which does not pass without leaving scars.

When one compares the first pictorial relief “Quadrat Bunt” (“Square Colourful”) from 1998 with “Freude” (“Joy”) from 2013, the creative freedom Renate Fabricius has attained with respect to her material becomes evident. She no longer arranges it over the entire surface, and she always endows it with a new rhythm. In this connection it is important to note that she has started using florist wire as an auxiliary material in the meantime. The small pieces of cork are no longer glued to the canvas, as it were, but float in front of it. This means that, as in “Freude” (“Joy”), she can take a condensed centre as the starting point and, always keeping a small distance to the canvas, let the cork pieces not only move away from the canvas but also put more space between them as the motion progresses outwards. Or, as in “Goldene Soldaten” (“Golden Soldiers”), she can place several rows of small pieces of cork over one another to attain a form of consolidation that is visible only when the work is viewed from the side. In this way, she also lets her material gain a certain degree of independence, especially when the gold-plated cork rings meander before the canvas.

Two particularly impressive works are “Wimpernauge” (“Eyelashes Eye”) and “Falsche Wimpern” (“Fake Eyelashes”), in which Fabricius has placed small pieces of cork previously sprayed with silver car paint in such a compact form that the circular arrangement seems to overcome gravity because the cork pieces attached to bent florist wire seem to fall in all four cardinal directions. That is only possible because they are intertwined but still stay mobile – now a striking interplay of light and shadow can unfold.